This is Part VI of our Thread Inspection 101 Series.

Now that we have fully dove into the weeds on the theory behind thread inspection, it is time to pull this series back out into the world of the practical.

As discussed in Part V, the complex geometry of thread inspection is prohibitive for most inspections needed on the shop floor. It is just not practical to complete a full dimensional inspection of every threaded component that leaves your facility.

Luckily, we have thread gages available as a very quick check for all threaded components. There are two main thread gages:  the thread ring for inspecting external threads and the thread plug for inspecting internal threads. This gaging system allows us to shorten inspection times down to a matter of seconds for each component. As a result of this tremendous efficiency, thread gages have become ubiquitous in machining centers around the world and are now one of the most common gages in existence.

We will begin our deep dive into thread gages with a much closer look at thread plugs and their usage.

All thread plugs are classified as an attribute gage, meaning they do not provide feedback on what the exact size of the dimension is. They are performing a functional inspection to verify that the internal threads being inspected are within the accepted tolerance.

Commonly, thread plugs come in what is known as an assembly, containing a Go plug, a No-Go plug and a handle that hold the two together. This is very convenient, because, as we will cover soon, an inspection requires both ends to be used.  As is seen in the above picture, many times the appropriate ends are marked accordingly on the handle (in this case with green for Go and red for No-Go). Oftentimes, the handle will be marked with the nominal size of the gage as well as the Go and No-Go pitch diameters.

As for the plug members themselves, there are three main configurations:  taperlock, reversible and trilock.

This is the most common style of working thread plug members. This style allows for a quick, easy replacement of a worn member in an existing handle. When a member is beyond its usable life, it can be easily removed and a new replacement inserted in its place. 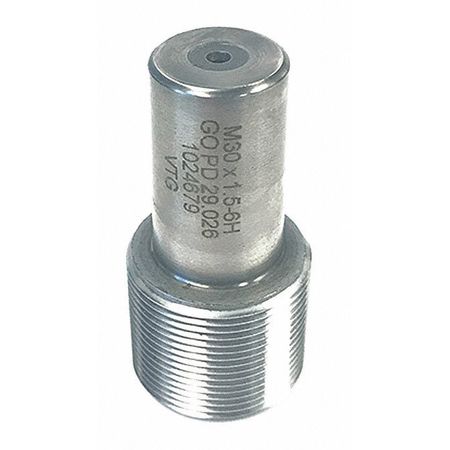 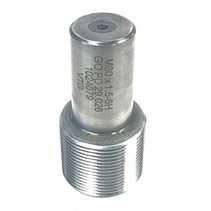 These members contain threading over the whole length of the member. The unique design allows for the member to be reversed within the handle once it reaches the end of its usable life. When doing so, the worn portion is turned inside the handle and the unused portion becomes the working portion of the plug. Essentially, this act doubles the life of the member, making it ideal for high volume applications. 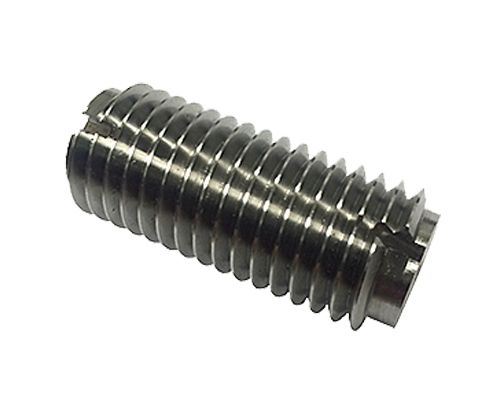 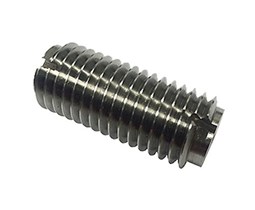 The trilock system contains a bolt that threads in along the axis of the member and locks it to the handle. This system is best suited for large thread plugs (typically over 1.5 inches). Due to the size of these thread plugs, it is not uncommon to see them as individual plugs, rather than assemblies. 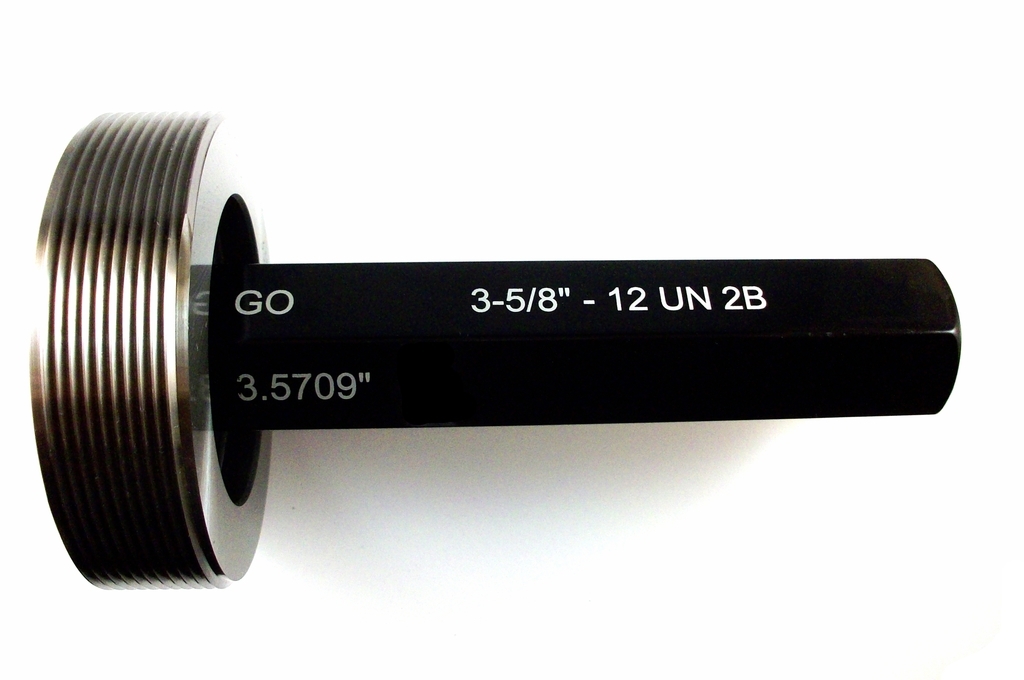 The Go thread plug is machined to a plus tolerance making it so the member is at the maximum material limit. It is commonly manufactured longer than the No-Go member, due to the fact that it should reach the full depth of a threaded component. Additionally, in larger sizes, the Go member is commonly machined with a groove in it. This groove is present to allow for the easy clearing of any debris inside the threaded component to prevent any unnecessary wear of the gage.

The Go member is used for verification of an internally threaded component. 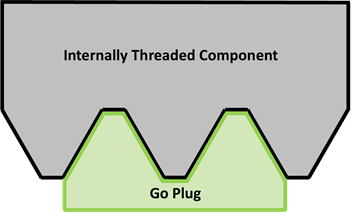 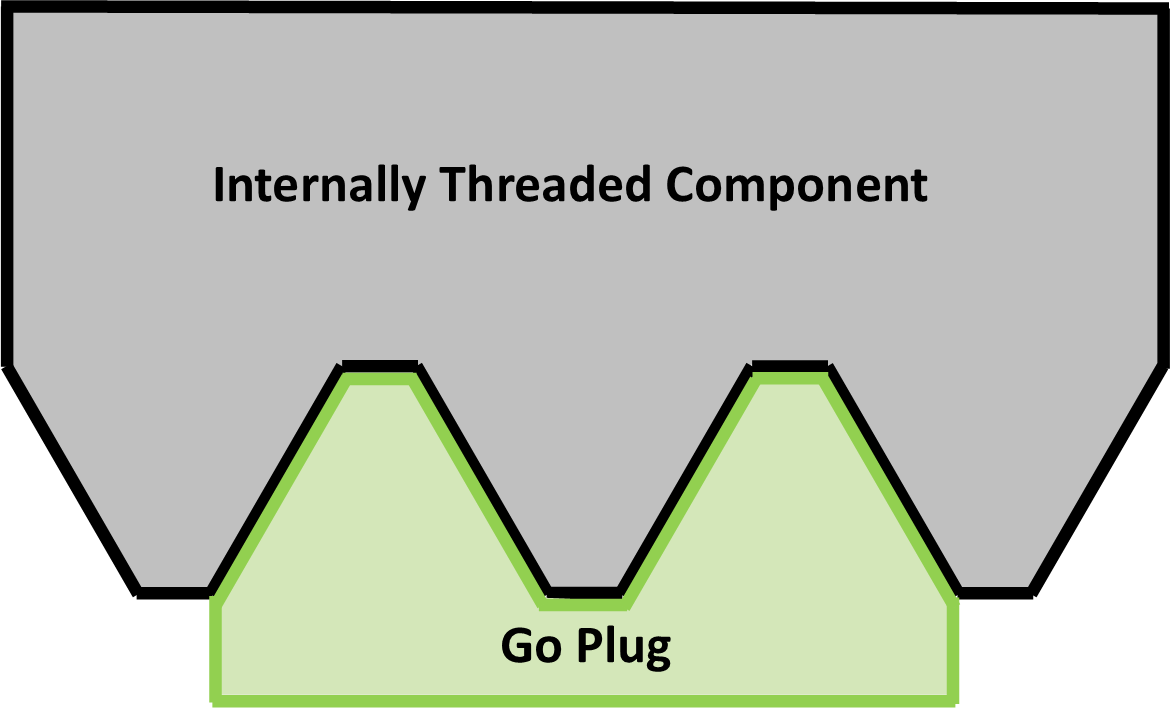 It inspects the following:

In use, the operator is to thread the Go member into the internally threaded component. The member should pass freely and easily through the whole length of the component. If it makes it all the way through the thread, the part passes. If it gets stuck or requires any use of force to make the member thread, the product is smaller than the minimum allowable size and should be failed.

Understanding this is very important. Sometimes, you can force the gage through the product. However, doing so is not doing anyone any favors. Forcing the Go member through the component can actually "grind" down the product making it seem like it is acceptable. This act will compromise the integrity of it. Additionally, it will slowly but surely wear out the plug member as well.

Obviously, like the Go plug member, No-Go thread plug member is used used for verification of an internally threaded component. 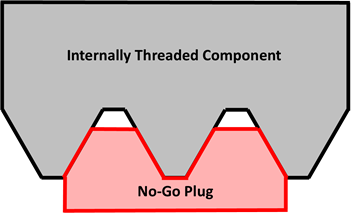 However, it is only used to inspect the maximum allowable pitch diameter. (Side note:  you may have noticed that neither Go nor No-Go members address the minor diameter of a component. If required, this check must be performed by other means, such as a bore gage).

In use, the operator is to thread the No-Go member into the internally threaded component.

Unfortunately, there is a difference in the criteria on when to pass a product between the inch and metric system. For the inch (Imperial) system, the No-Go member should not pass more than three complete turns into the product. If, of course, the product is thin and has less threads than that, modification of this rule would be required. For the metric system, the criteria is that the plug should have a definite drag before the second turn.

If the No-Go member engages with the product more than the allotted amounts for either system, the product being inspected is larger than the maximum allowable size and should be failed.

Additionally, there is a somewhat common and very confusing inspection problem that arises when tools and taps are worn or chipped. In this instance a hole will accept the No-Go member, but not the Go member. How is this possible? If you recall, the No-Go member only checks the pitch diameter of the product. As such, it is not inspecting the deepest points (major diameter) of the thread. Without knowing what is occuring, the machinist may adjust to cut the thread larger on the next piece. This would be a mistake, as it is actually lead to overcutting the thread pitch diameter. Confusing, isn't it?

It is because of this ambiguity and complexity that consistent and ongoing training should be provided to all users of thread plugs within your company. This is your best shot at guaranteeing consistency across all users.

Up until this point, our entire conversation has focused on working plugs - i.e. the plugs you would use to inspect a product. However, there is another type of plug, the setting plug, which is used in conjunction with a thread ring to help "set" the ring gage to the correct size. As such, we discuss the setting plug in detail alongside the thread ring in subsequent posts of this series.

In Part VII of our Thread Inspection 101 series, we will explore the ins and outs of thread rings and their usage.